DAOs and digital asset protocols are still in their infancy and require a solid structure to grow effectively. Over the past few months, we have seen tremendous success in many community-driven DAOs led by a core team to guide action.

As the Lucidao protocol scales, it will need proper structural hierarchy, resourcing and processes for the various teams building under Lucidao and its dApps.

This proposal highlights the details of the Lucidao organizational structure and its budget allocation as it aims to operate and function as a fully decentralized autonomous organization.

Our current core team consists of world-class developers, serial entrepreneurs and business specialists. They have graduated from top-tier universities and schools with MBAs (Stanford University and IE Business School) and gained experiences in Goldman Sachs, Boston Consulting Group and others. The core team has the competences and leadership in building world-class community-driven dApps.

Hence, the purpose of this proposal is to outline the Lucidao organizational structure so that we can best respond to the DAO and its future dApps/business models.

I propose the following initial positions:

To build and scale dApps efficiently, our teams will form a flat organizational structure to prevent departmental silo mentality from the beginning. For each dApp developed, one or more members from the Executive team or Project Management team will be assigned as leader/s to pave the way to manage and track the project’s development. 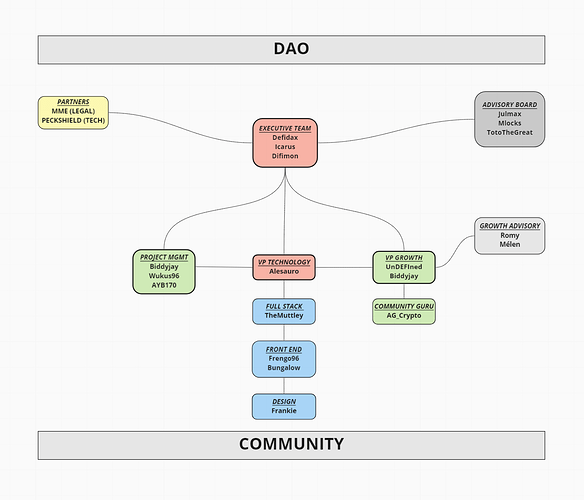 This Budget Proposal lays out the costs associated with the Lucidao project.

The team has been working for the past year with the goal to build and deliver Lucidao protocol to the community. This included an extensive analysis with MME legal and a massive effort by the core team to deploy Lucidao Governance structure and smart contracts.

After Lucidao protocol deployment, no one on the team’s side has control over treasury and smart contracts; This is why it is necessary to discuss, propose and vote over this matter.

Costs have been listed in the proposed budget below. We have also provided justification for each cost element. If you have any questions related to this Budget Proposal, please don’t hesitate to interact here below.

With the aim of lowering the costs during the start-up phase, the Executive Team, Project Management and advisory boards will not receive any compensation for their work.

Keep in mind that the fUSDT needed for the following payments would be taken from the proceeds raised during the initial sales and kept in Lucidao Governance Vault. You can check the balance here.

No LCD tokens will be sold to finance this budget proposal. 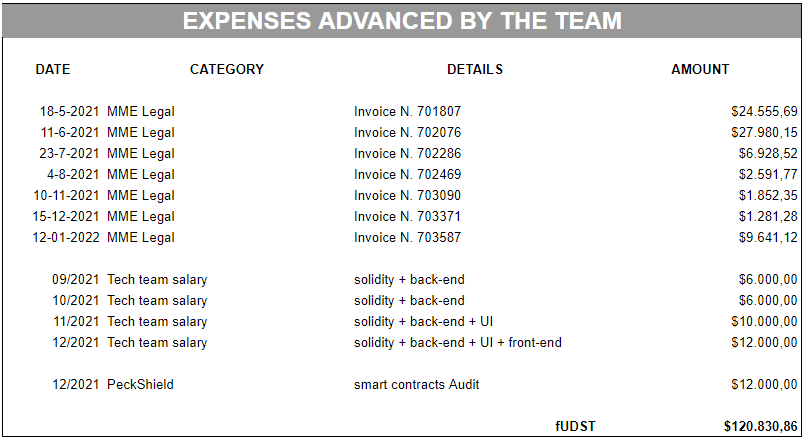 Team salary compensation (22,000 fUSDT transferred on a monthly basis): the allowance to transfer this funds will be given to
0xf56564E5D5EEFDD634D94bcf0DAE085F5D0Aa10c